What is the goal of abdominoplasty?

The goal of abdominoplasty, or “tummy tuck”, is to flatten the abdomen, tighten the skin, and improve the overall contour of the waist. The scope of the procedure depends on how much excess skin and fat there is, and the degree of muscle laxity present. Liposuction of the waist and the lower back area may be included to achieve the best result.

Who is a candidate for abdominoplasty?

Abdominoplasty is typically performed in postpartum women. Multiple pregnancies can stretch the lower abdominal skin beyond its ability to contract back to normal. It also can cause umbilical hernias and separation of the abdominal muscles. The latter can cause the abdomen to bulge considerably.

Few men are candidates for abdominoplasty. Those typically interested are often overweight. They exhibit significant abdominal protrusion due to high fat content inside the abdomen, something not treatable by surgery. However, men that have flat abdomens with localized fat deposits in the lower abdomen and the hips (“love handles”) are often good candidates for liposuction instead of an abdominoplasty.

Both men and women who have lost more than 100 pounds following bariatric (weight loss) surgery are often excellent candidates for abdominoplasty. The emphasis in these individuals is on removing excess skin, although muscle tightening may also be indicated.

When should abdominoplasty be performed?

Abdominoplasty should not be performed for at least six months following the last pregnancy to allow for maximum natural skin contraction and muscle tightening to occur. It should be deferred if future pregnancies are planned. Although pregnancy can proceed normally after surgery, the benefits of the procedure may be lost. Abdominoplasty in the massive weight loss patient should be deferred until weight has remained stable for six months to a year.

What are the different options available?

The simplest type of abdominoplasty consists of excess fat removal by liposuction alone. This is applicable only to those men and women who have tight abdominal skin and muscles. Women who fit this category usually have not had children. This procedure entails using very small incisions placed inside the navel and within the pubic area through which liposuction is performed. Recovery is relatively quick and nearly complete by one week.

Those with muscle laxity and limited amounts of excess lower abdominal skin are candidates for a modified abdominoplasty. This is sometimes referred to as a “mini-abdominoplasty” although this is a somewhat misleading and euphemistic term. This procedure utilizes a low horizontal incision to provide access for both muscle tightening and skin removal (Figure 1, left). The final scar is low, like that of a cesarean section, but it is much longer. The navel moves together with the abdominal skin as it is pulled down so its final position is lower than originally (Figure 1, right). A complete abdominoplasty permits maximum removal of excess skin and stretch marks (Figure 2, left). The abdominal muscles are tightened with internal sutures. Liposuction of the flanks and lower back may be included. The incision is longer and ends up higher than that used for a modified abdominoplasty, even though it is made very low to begin with. The final scar extends from one hip all the way across to the other and lies just below the belt level. There is also a second small scar that encircles the navel (Figure 2, right). Both scars usually fade after a year but they are permanent and are always visible to some degree. Their final width, texture, and color may vary. 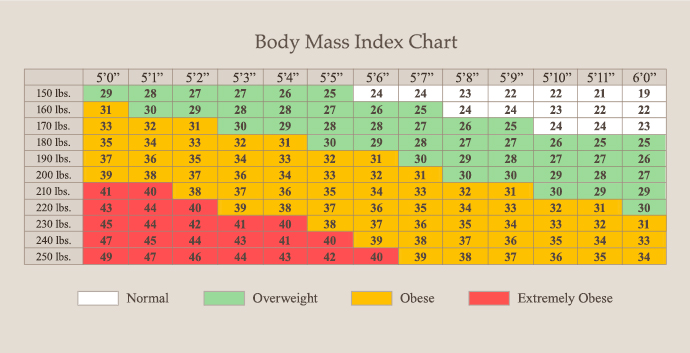 What is body mass index (BMI) and why is it important?

Body mass index is a measure that correlates height and weight to categorize weight health. Those with a BMI over 30 are considered obese (Table 1). Medical studies have shown that obese individuals are more prone to surgical complications such as infection and wound healing problems that may require additional surgery. They are also at greater risk from anesthesia. Patients with a BMI over 30 are therefore higher risk candidates for surgery. Weight loss is strongly recommended prior to surgery to reduce this risk.

What nonsurgical techniques are available to make the abdomen look better?

Unfortunately, focused exercise to tighten separated abdominal muscles does not flatten the abdomen. Although weight loss will thin the fat layer between the skin and muscle to provide some benefit, it will not tighten loose skin. Nonsurgical methods to tighten skin are not very effective unless the amount of skin laxity is quite minimal to begin with. Therefore surgery is the only effective option in those exhibiting significant skin laxity and muscle separation.

What is rectus diastasis?

There are two rectus abdominis muscles that vertically span the middle of the abdomen side by side from the ribs to the pubic area. The normally tough connective tissue that joins them in the middle progressively stretches with each pregnancy and the abdominal wall becomes weakened (Figure 3, left). This area can sometimes be seen to partially pop out when sitting up. The separation of the rectus muscles is called a diastasis, hence the term rectus diastasis. This is what causes the abdomen to protrude following multiple pregnancies.

How is rectus diastasis treated?

The rectus muscle edges are sewn together to eliminate the space caused by the stretched tissue in between. They must first be completely exposed by excising the excess lower abdominal skin and then raising the upper abdominal skin over the muscles as far as the ribs above. The muscles must be sewn together from top to bottom otherwise the abdomen will still bulge where they are not tightened (Figure 3, right). Several layers of permanent stitches are usually placed in order to maximally flatten the abdomen. What about umbilical hernias? How are they treated?

Umbilical hernias can occur with or without rectus diastasis. They are usually due to a tear in the naturally weak connective tissue layer under the navel. This results in a bulging navel due to pressure from inside the abdomen. The bulge commonly includes fat from inside the abdomen, and rarely portions of intestines. Umbilical hernias are repaired by closing the hole under the navel with permanent stitches.

How long do the benefits of surgery last?

Abdominoplasty results are usually permanent. Pregnancy following abdominoplasty may result in the need for a second procedure but this scenario rarely occurs. Most patients have only one operation and remain pleased.

Where is the surgery performed and how long does it take?

Can other procedures be done at the same time?

Abdominoplasty may be combined with other procedures such as liposuction of the lower extremities, breast augmentation, blepharoplasty, or rhinoplasty, for example. Usually only one of these procedures should be done at the same time, otherwise total surgery time is prohibitive from a safety standpoint. While longer procedures such as a breast reduction or a facelift can technically be done at the same time as an abdominoplasty, the total surgical time would be excessive.

What type of anesthesia is used?

General anesthesia is required. A board certified anesthesiologist is present for the entire procedure and uses state-of-the-art monitoring equipment.

What are the risks associated with abdominoplasty?

Complications following abdominoplasty are uncommon. They include blood collection under the skin (hematoma), infection, and delayed healing due to skin loss at the incision site. Treatment of a hematoma usually requires another short procedure on the same day as surgery. This does not affect the recovery process or the final result. Other problems usually resolve without further surgery although skin loss sometimes requires a touch-up procedure later.

A more significant potential problem is the development of leg vein clots (deep venous thrombosis or DVT) that can lead to serious problems such as pulmonary embolism. While very rare, risk factors include age over 40, being overweight, and a previous history of clotting problems. Compression calf boots pump blood through the legs during surgery to reduce risk, as does early ambulation. An anticoagulant may be given on the day after surgery in those with a high risk profile. Fortunately, the vast majority of patients do not have any complications from abdominoplasty surgery.

Why is smoking so harmful for surgery?

Smoking severely reduces blood supply to the skin and also delays healing. It can be responsible for skin loss, wound infection, bad scars, and other complications that may require corrective surgery. It is therefore essential to stop smoking completely for at least three weeks before surgery and six weeks after. Simply cutting back is not enough. Nicotine containing patches and gum are equally harmful.

Why do I need nurses after surgery?

Private duty nurses are required for forty-eight hours after surgery. They are arranged by our staff. These nurses are specially trained to take care of abdominoplasty patients. They monitor vital signs and the surgical site, provide dressing and drain care, administer medications including injectable anticoagulants, and assist with feeding and ambulation. They prevent unnecessary activities in order to minimize the possibility of developing a hematoma. They meet our patients at the office following surgery and escort them either home or to a hotel to continue postoperative care.

The recovery process has been improved in recent times by avoiding the placement of multiple plastic drains under the skin, previously a requirement.  Although the surgery takes longer to perform without drains, ambulation is easier and postoperative care is simplified.  Not all surgeons do this however, despite the benefits. Stitches dissolve and do not require removal. An abdominal binder is worn for at least two weeks after surgery.

Abdominal liposuction by itself is not very painful. Tenderness and stiffness lasts for a few days. Recovery is near complete by one week and return to work is often possible sooner. Exercise may begin after two weeks.

Modified abdominoplasty and complete abdominoplasty are significantly more painful due primarily to the muscle tightening component. Nevertheless, ambulation is strongly encouraged on the day of surgery. Resumption of most normal activities including work and childcare is possible by two weeks although there is typically lingering fatigue at this point. Complete recovery takes about six weeks.

Flying and driving are not recommended for two weeks. Walking outdoors can begin after a few days, as tolerated. Mild cardiovascular exercise without impact such as a stationary bike can begin gradually at three to four weeks. More intense exercise can resume at six weeks but activities such as jogging, weightlifting, ball sports, yoga, pilates, skiing, and horseback riding should be delayed for at least two months.

What are some of the limitations associated with abdominoplasty?

Patients who are overweight achieve more modest improvement from abdominoplasty. Although the abdomen can be flattened in the front, abdominal girth is not significantly reduced by this procedure. Patients who are overweight also have high fat content between the organs inside the abdomen. This contributes to abdominal protrusion and limits how much flattening can be achieved.

Patients who are “short-waisted” also achieve more modest improvement from abdominoplasty. The shorter vertical dimension of the abdomen in these individuals makes the abdomen still seem wide despite being surgically flattened in the front.

The surgical scar in complete abdominoplasty is long and positioned higher than ideal. The incision is made very low but it is pulled upward by skin tension during wound closure. High skin tension also causes the scar to be wide and thick sometimes.

Scar quality around the navel sometimes limits the ability to wear a two piece bathing suit with confidence. Although the navel does not have a scar when modified abdominoplasty technique is used, it may appear positioned lower than normal due to technical reasons.

What are the costs involved in having surgery?

What are the steps involved in proceeding with surgery?

At the initial consultation your abdomen will be evaluated and a surgical plan proposed, provided that you are a good candidate for one of the available options. Once the plan is agreed upon a surgical date can be scheduled. Photographs and preoperative laboratory studies follow. Patients with significant medical conditions will need to obtain clearance from their internist or other specialist beforehand.